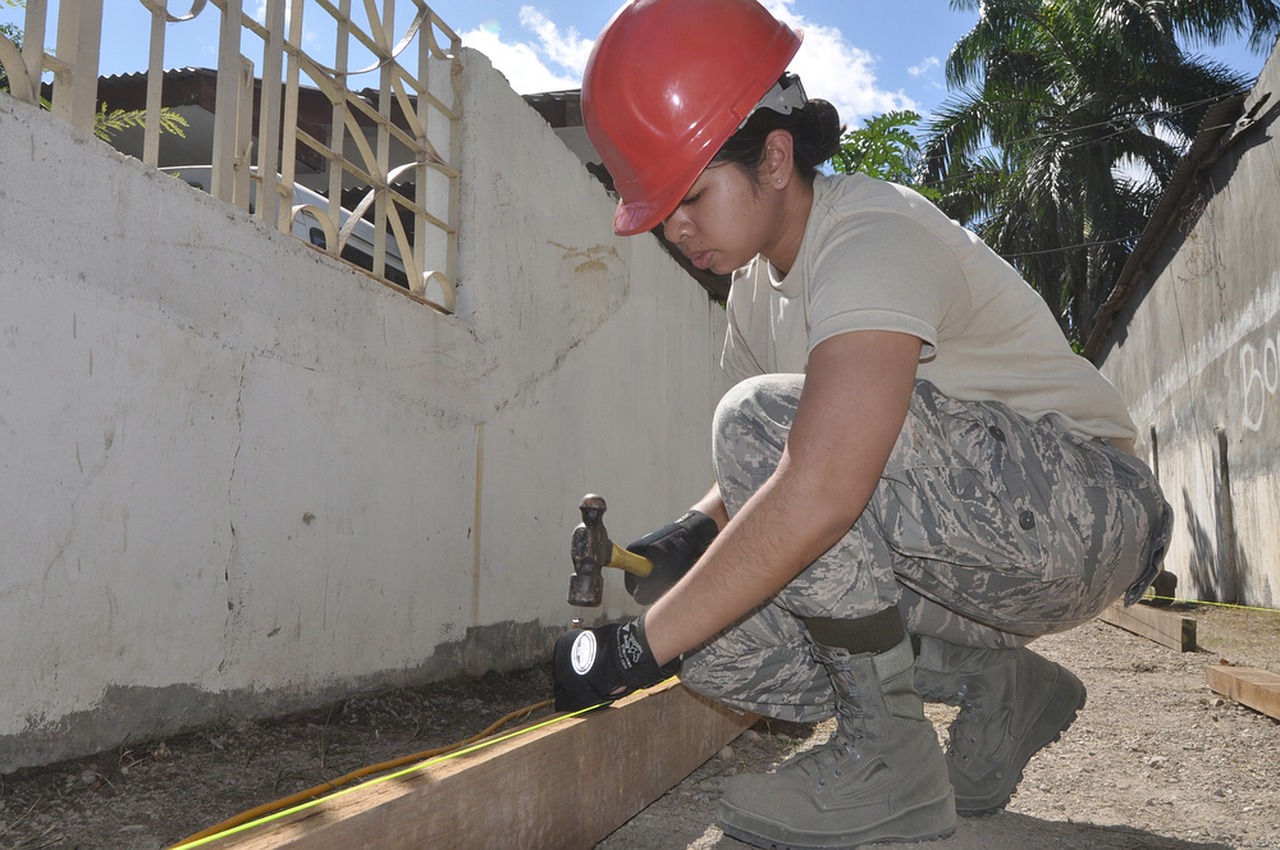 It is fair to say that women have overcome a lot of challenges throughout the years, fighting for equal rights, equal pay and against the stereotype that they belong in the kitchen. Whilst gender equality has made great upward progress, there are still some cracks in the foundation, including the numbers of women working in construction.

Reports showed that older men were being over relied on in construction and with an estimate of 700,000 more people needed to fill jobs, it’s now ever more urgent to recruit more women and young people into the industry to prevent a workplace crisis in the UK.

Currently, approximately half of the world’s workforce is female, but according to Forbes, it is estimated that only 24% of senior business roles are held by women. In the UK construction industry the imbalance is huge – just 11% of all employees are female and only a small portion of women have manual trade jobs. Why is this?

When a survey was carried out on London’s Oxford Street in 2005, asking 50 women ‘Do you want a job in construction?’, well over half of them said ‘no’. When asked to choose words to describe why, ‘dangerous’ and ‘macho’ were among the highest. It therefore seems the traditionally masculine elements of the industry are putting some women off.

However, the nature of work within the building industry is changing. The CITB (Construction Industry Training Board) found that the modern construction industry actually relies less on physical strength and more on brainpower and ideas. The industry employs around 14.1 million people in Europe and can offer challenging roles with good career progression, so CITB focus on working with schools to promote this path from a young age, especially aiming to dispel the masculine stereotype of the industry in order to attract girls.

Efforts are also being made to correct the gender imbalance across the entire UK workforce. As of 2016, all publicly listed companies have to enforce a 30% female quota within their management boards. If one of these companies is unable to find an appropriate female candidate for a position, this seat must remain vacant until a suitable woman is found.

The future therefore looks hopeful, so we should see more women in the building industry. With the right promotion and education, more women will be encouraged to take up challenging and exciting construction roles. At Classic Folios we will keep an eye on the trend and report any new developments in this area.

We are delighted to welcome The PG Group to the Classic Folios family!

We are very excited to have partnered with The PG Group, following their order of custom branded Folios and Document Boxes!

We are delighted to welcome Newland Homes to the Classic Folios and Spaciable family!

We are delighted to have partnered with Newland Homes, following their order of Spaciable Elite, Completion Manuals and pre-configured Lenovo tablets!

We are delighted to welcome Dundas Estates to the Spaciable family!

We are delighted to welcome Dundas Estates to the Spaciable family, following their order of Spaciable Elite for 500 plots!

The latest National New Homes Customer Satisfaction Survey made very pleasing reading, with 92% of the developers we work with on the list receiving 4+ stars.

We are delighted to welcome Hive Homes to the Classic Folios family!

Hive Homes has just signed an order for 128 folios with completion manuals, covering 4 developments across a 2 year period.

We are delighted that Muse Developments has placed an order for their Atelier development in Salford!

Legal & General has ordered 31 iPads for their Buckler’s Park and Finchwood Park developments.

Laragh Homes has ordered Spaciable Pro and folios with reservation and completion manuals for their next four developments.

We are thrilled that Hill Residential has placed a big order to cover three developments over the next 12 months.

Bewley Homes has added 68 plots to their Spaciable order

Bewley Homes, who we have worked with for over 15 years, has added 68 plots to their Spaciable Pro order.

Having worked together since 2018, we are thrilled to be providing FABRICA with folios and manuals for 589 units to cover the next 12 months.

We are delighted that London and Home Counties developer, Hambridge Homes, has placed a re-order for 34 plots on Spaciable.

We are delighted to be working with Stagfield

We are excited to be working with Galliard Creative to provide them with folios for an award ceremony.

We are delighted to announce the launch of Spaciable Legal –the latest addition to our award-winning portal.

We welcome First Base

We are very excited to be working with First Base Limited – a mixed use developer who have projects in London, Brighton, Bristol, Cambridge and Milton Keynes.

In the latest chapter of our exciting partnership with CALA Group Ltd, we are thrilled to be providing them with Spaciable Pro.

We are thrilled to have taken another order from long-term client Hill Residential.

We are delighted to have secured an order for 200 Completion Manuals in 4D40 folios from Norfolk Homes.

We are excited to announce Life Less Ordinary, a London-based developer, is joining our Classic Folios family. They are run by Rinay and Hinesh Chawda, and hav

We are delighted to announce that Bewley has signed a new contract with us for Spaciable, taking our Pro option.

Our long-standing client, CALA Homes, has renewed their contract with us for more document boxes across the group.

We are delighted to welcome John Mitchell to the Classic Folios team!

We are delighted to welcome Battersea Power Station Development Company back into our fold. This time they are going digital with our bespoke portal, Spaciable!

Urban Roc has asked us to be part of their Park View and Headlands developments.

Ssassy Property is saving the planet one step at a time.

The London Borough of Camden

We have recently said ‘hello’ to IDM Properties.

We are proud to work with ZeroC

Waterstone add another development to Spaciable

We are pleased to welcome Eleanor Charles Homes

Countryside give their buyers Spaciable

Countryside Properties use Video for 3D Tours and How to's

Developer Trends 2020/2021 - A Brave New World: Trends for Residential Property Developers and How to React

A Brave New World: Trends for Residential Property Developers and How to React - FREE DOWNLOAD

We’ve only gone and done it again!

We are patting ourselves on the back again this year and we are only in June as we take home three awards!

At Classic Folios, we are committed to supporting local charities.

Research commissioned by Classic Folios. Poll of 1,000 homeowners and 1,000 renters in October 2018.

Rent and Living launched as part of Spaciable upgrade

We are thrilled to share the news that we have rebranded our online portal from Hoozzi to Spaciable!

Raising money for Alzheimer's - so far £830 and still counting!

Proptech for Each Season

It doesn’t feel like all that long ago when technology’s role in the home was predominantly for entertainment and information.

We have had a great start to 2019 and we want to thank you, our clients, for helping us over the last 21 years to get to where we are now.

Are you looking to improve your customer experience? We’ve had a look at how easy it is to do and the impact it can have on your business.

National apprenticeship week runs from the 4th March through to the 8th March.

We are excited to announce that we have launched our new client referral scheme here at Classic Folios.

Please join us in congratulating Ellis on his promotion!

What Will Happen to the Housing Market in the First Quarter of 2019?

Behind the Scenes with Ballymore, Embassy Gardens

We talk to Gordon Piper at Hazeley Homes about how they deliver exceptional customer care using a digital handover.

Taking to the Field

Deanfield Homes, a new developer that is active in Oxfordshire, Buckinghamshire and Hertfordshire, has joined up with Classic Folios.

We are very excited to welcome Wates Residential to the Classic Folios family.

Team Trip for a Taste of BRE Innovation

Our editorial team took a trip to the BRE (Building Research Establishment) Innovation Park in Watford for a first-hand look at some ingenious show homes.

Classic Folios is thrilled to announce Chris Pickard as the new Head of Account Management.

Octagon Homes worked with Classic Folios to create fully responsive property tours that feel as real as being in a new home.

What’s Next for PropTech?

2017 saw an explosion of technological innovation within the world of property, with numerous new products and services promising improved experiences...

The Fusion of Property & Technology

Proptech experts are advising the housing industry to become more digitally savvy to keep up with the demand of consumers. which is why we've created Hoozzi.

Classic Folios would like to wish a warm thanks and Merry Christmas to their clients as the year nears its end.

Hoozzi Area Guide is soon to launch, providing users with local information about their community.

Hoozzi Services lauches on 27th November 2017. Offering a range of services to help people move, manage and enjoy their home.

Classic Folios would like to wish huge congratulations to the clients who received an award at this year’s Housebuilder Awards.

We are thrilled to announce that Classic Folios won the Best Industry Supplier prize at the Regional Property and Construction awards 2017.

Weston Homes has Partnered With Classic Folios for 16 Years to Achieve Customer Service and Satisfaction Targets.

One Portal. Lots of Possibilities.

We're thrilled to present the next generation of property browsing.

Are Your Buyers in the Know About their New Build Warranties?

The 2017 Homeowner Survey concluded that many homeowners still feel in the dark about their warranties.

Keeping Our Clients Compliant with the Consumer Code

Another Great Year with Weston Homes

Referrals come from positive sales experiences, but also the aftercare...

Out With the Old, In With the New

Housing professionals are encouraging politicians to take bolder steps to hit housing target and to beat the property shortage crisis in the UK.

Digital Handovers for Any Budget

Building on the success of its digital new home handover solution, Classic Folios is proud to launch an advanced Android tablet to its extensive product range.

Classic Folios is delighted to annouce the launch of its new branding and website.